In 2016, Picto developed a new wayfinding and signage scheme for Northern Stage, the largest theatre and producing company in the North East. The building, formerly the Newcastle Playhouse, had been renovated by architects Mosedale Gillatt who had reworked Stage 3 in the theatre’s basement, changing the venue’s floorplan. 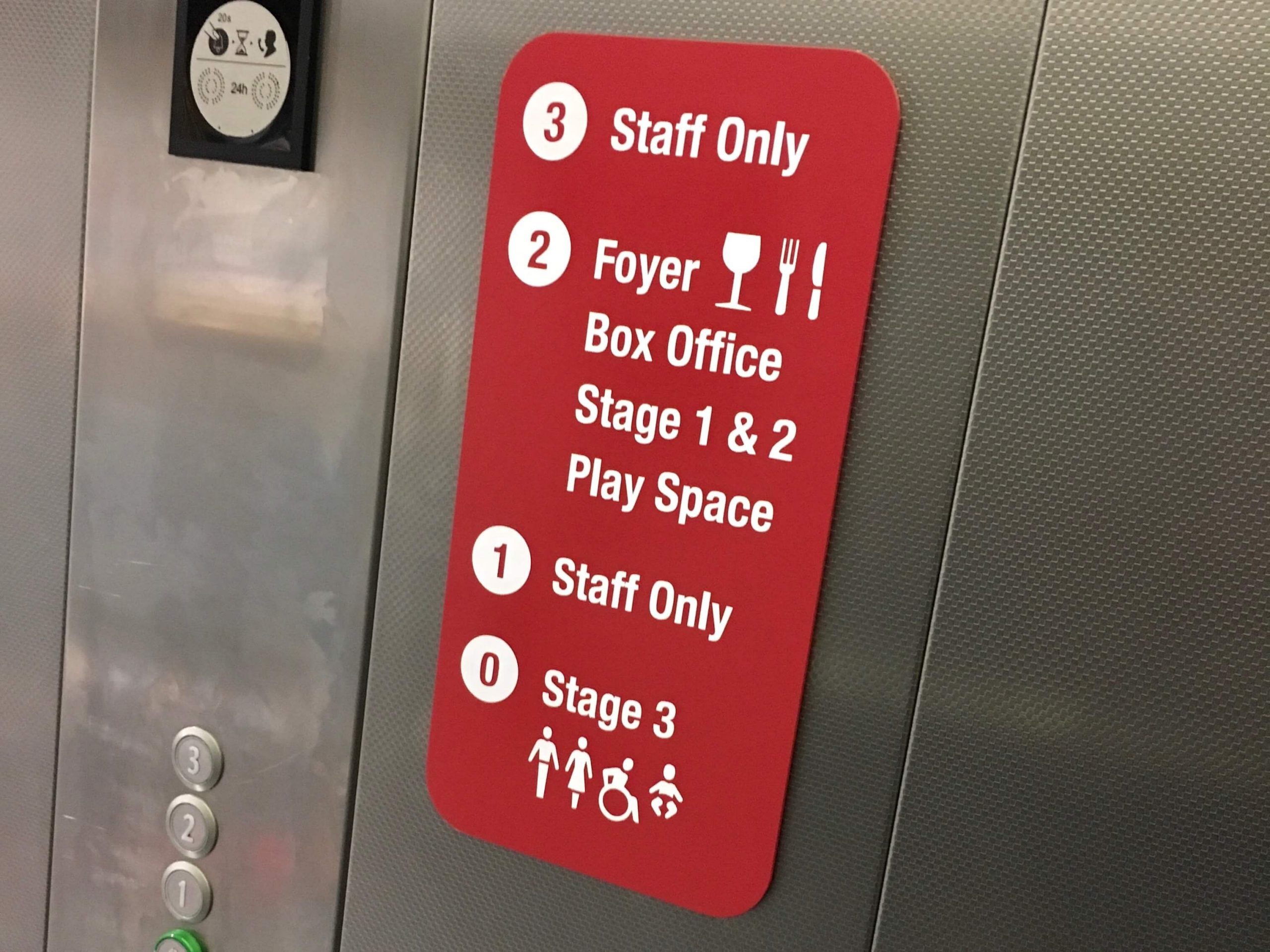 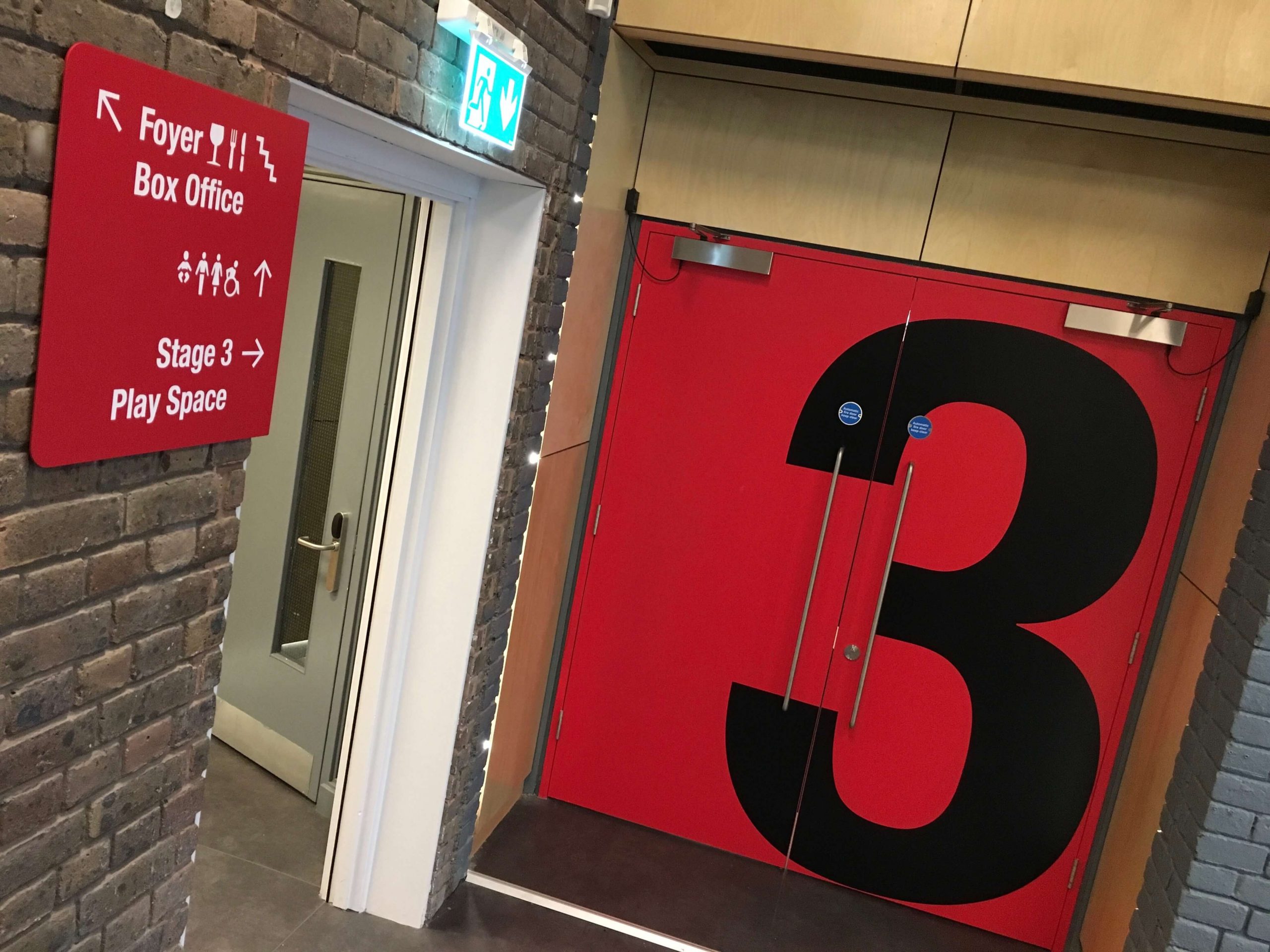 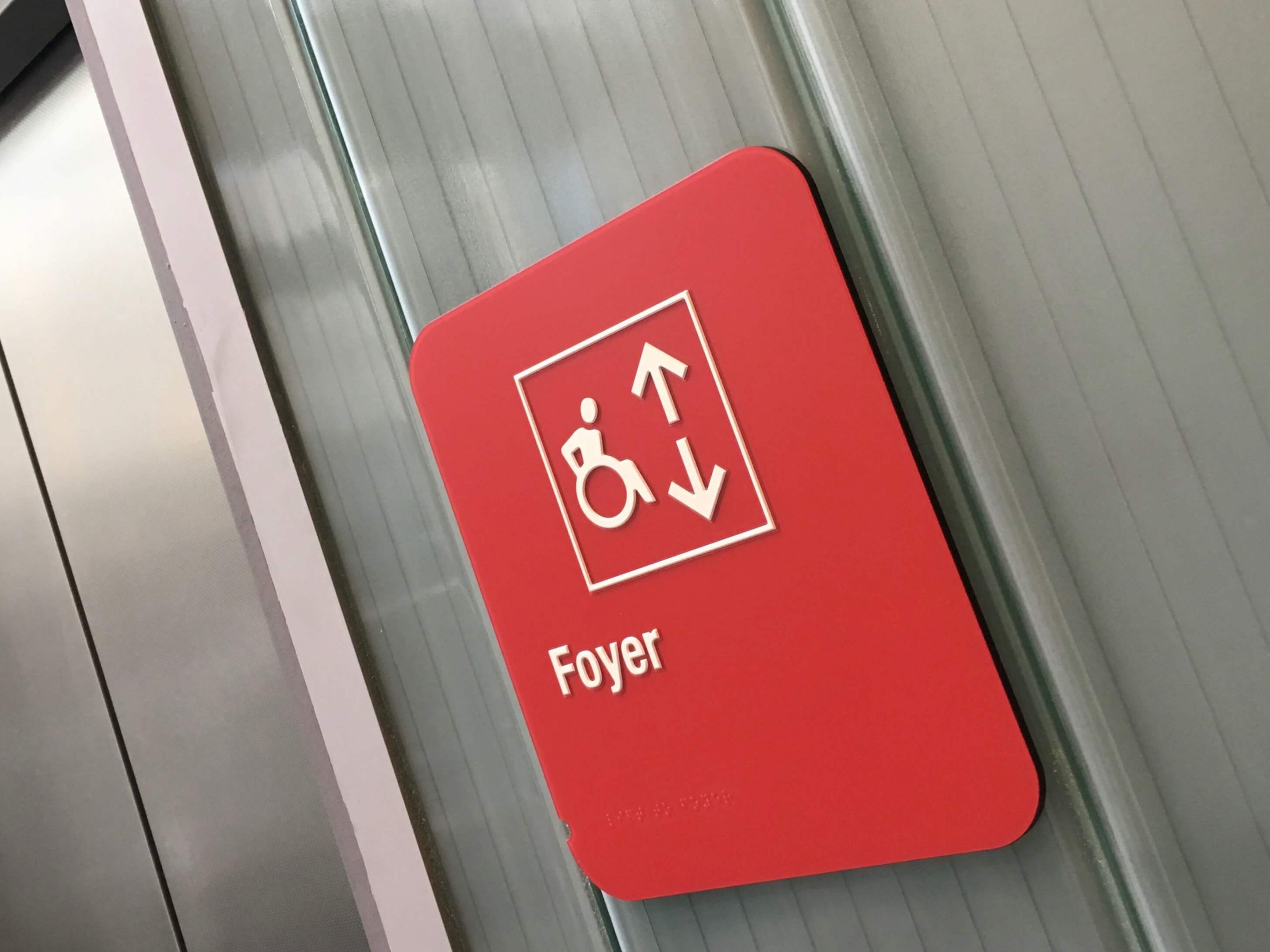 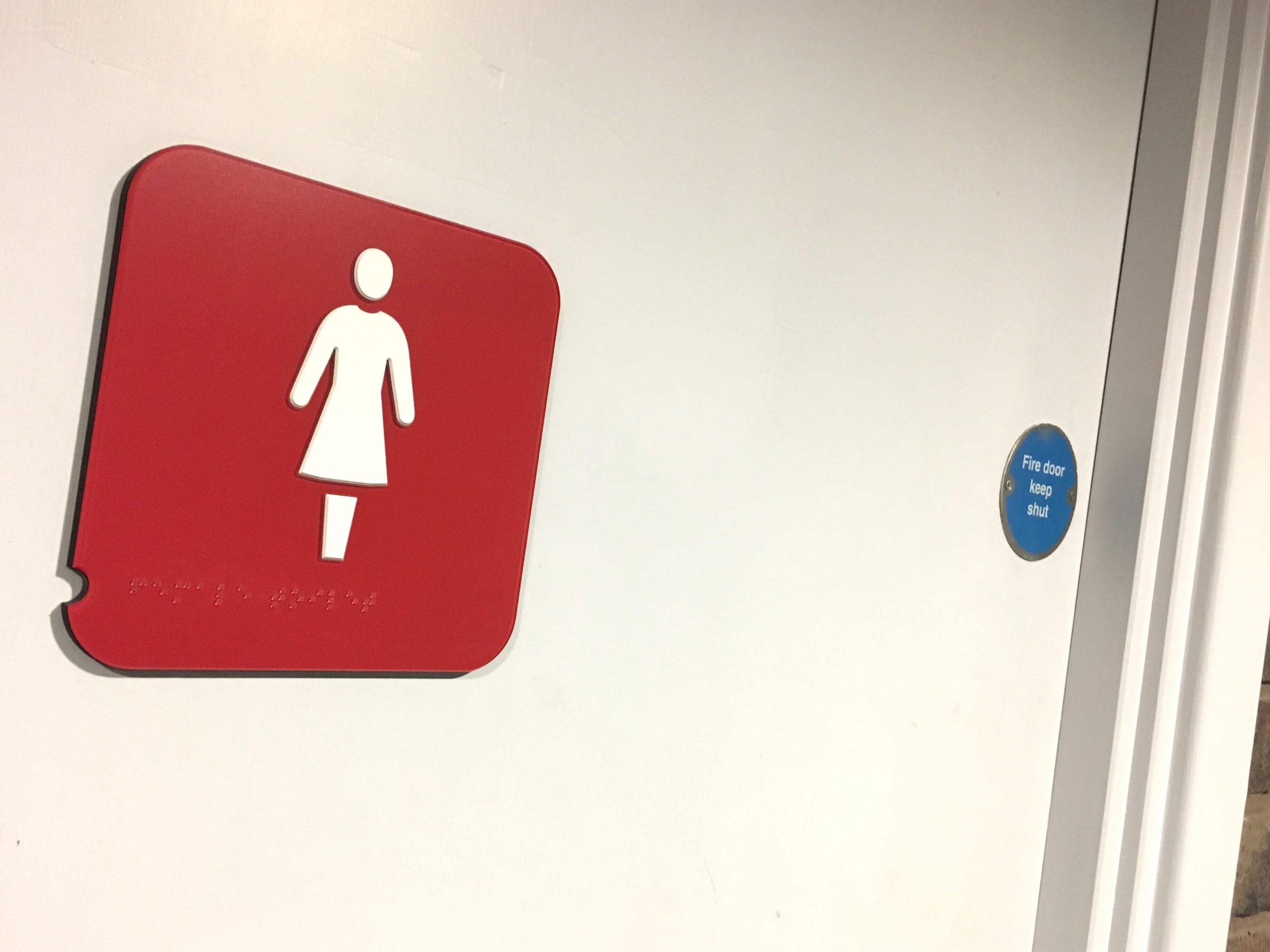 Every decision on this project was made with the three-week deadline in mind. An essential part of our thinking was consideration for how wayfinding design could help people to find their way around the theatre’s newly-redeveloped layout. 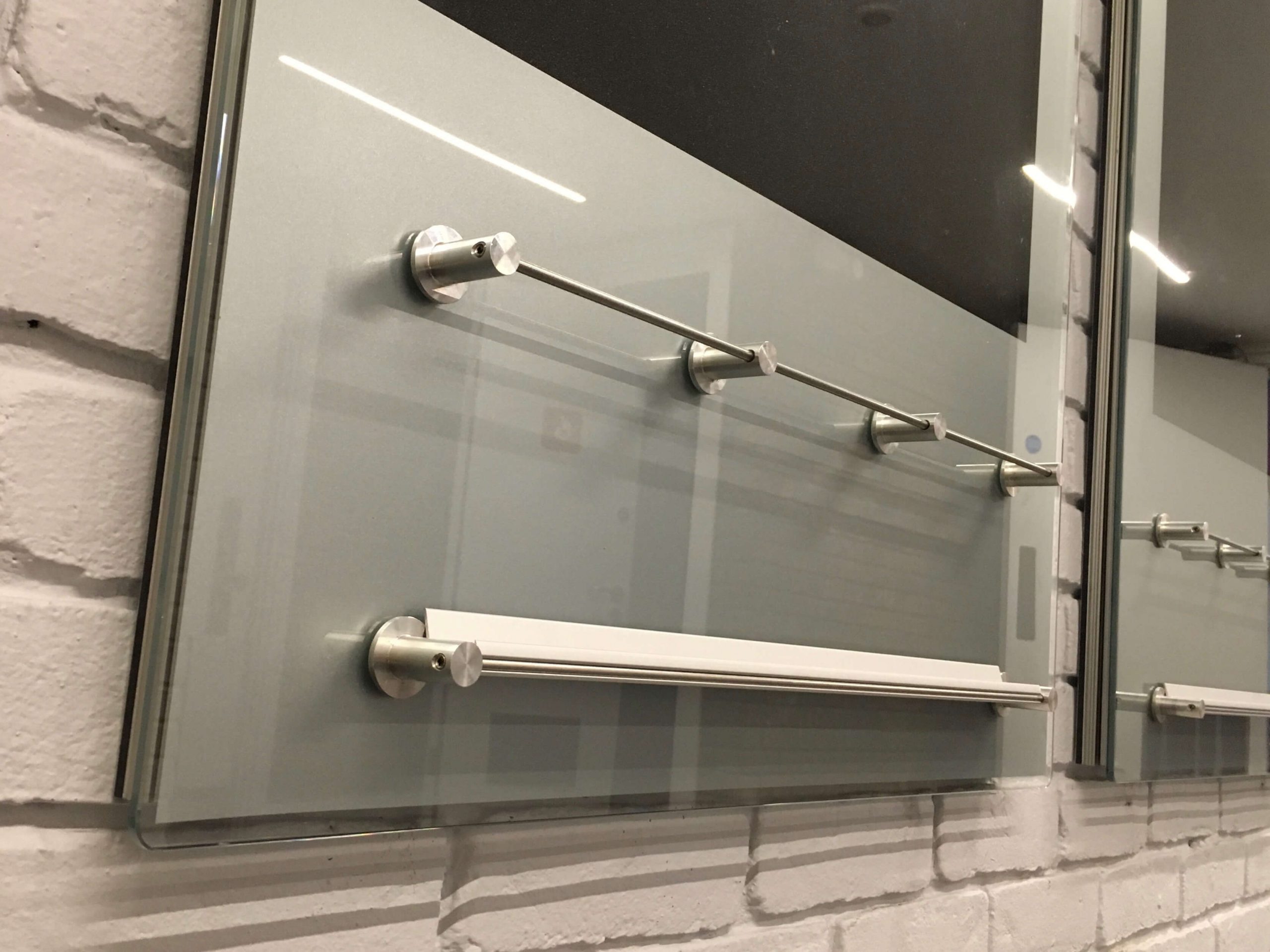 Northern Stage is an inclusive and fully-accessible theatre. Built in the 1970s, the Brutalist building has multiple staircases, all of which provide access to different parts of the venue. It also has three lifts, which were added at different times and which go to different floors. All of which makes the theatre a complicated space to navigate.

Architect Mosedale Gillatt’s re-working of the theatre’s Stage 3 created a new contemporary space for audiences and performers alike. It also improved access to the venue’s social and exhibition spaces, and the basement toilets.

The reconfiguration also altered how the lower ground floor space of the building worked. As visitors tried to find their way around, the theatre team reported that people were getting lost and that they needed a new approach.

Wayfinding helps people find their way from place to place

Northern Stage invited Picto to redevelop the theatre’s wayfinding and signage to help people find their way from place to place around the newly-reconfigured venue. The project had to be completed in time for the client’s official launch event, just three weeks from the initial briefing. With this tight deadline in mind, every decision on this project was made to meet this short timeframe.

The project presented us with the opportunity to take into account how visitors’ use of the space changed throughout the day. Northern Stage is popular with a wide range of audiences. The theatre’s matinee performances attract young families with babies and children during the day, while the evening performances attract older and more traditional theatregoers.

The new layout of the lower ground floor meant that an essential part of our work was the consideration of how the already complicated building was being used. And how wayfinding design could help people find their way around the new layout.

It was critical for Northern Stage, an inclusive, fully-accessible theatre and registered charity, that our response met with DDA guidelines.

Working with the theatre team, we decided that a bright and bold approach to the signage would sit well with the building’s quirky 1970s architecture and the Northern Stage brand.

Because of the tight timescale involved, the client needed the new signage scheme to be easy to amend, in case any changes were required after installation. This adaptability freed the client up to sign things off at speed, in the knowledge that it could be changed with ease.

A bold and contemporary signage scheme

We chose a striking bright red signage scheme to match the stage doors and to contrast against the building’s varied backgrounds, which included natural dark brick, white-painted brick and full-height glazing.

We applied raised tactile graphics and Braille to the venue’s lift and toilet door signage to support visitors with specific sight issues and to meet with the theatre’s inclusivity policy.

Less is more for maximum clarity

To work with the building’s unusual layout, with its combination of small spaces with low ceilings and larger areas with triple-height ceilings, we used wraparound sign panels. This meant that even if visitors couldn’t read a sign’s content from where they were standing, it would be apparent where the directional signage was located.

By positioning information only where it was needed, and using contemporary and easy-to-understand pictograms, we kept the information on display to a minimum for clarity and maximum effect.

The project resulted in new signage to the upper mezzanine floor, the foyer with its cafe bar and restaurant, the box office and Stage 1 and Stage 2. In the theatre’s basement, the newly-redeveloped Stage 3 and Play Space were clearly indicated, together with directional signage throughout the building for the accessible toilets and baby changing facilities.

The installation of Northern Stage’s new wayfinding and signage scheme was completed less than three weeks from our initial briefing. Each sign was manufactured to fit with the proportion of the space where it was located – and the scheme required only a couple of minor amends after the client’s launch. A follow-on phase in December 2016 saw the successful installation of sponsor acknowledgement and contemporary poster and leaflet displays throughout the venue.